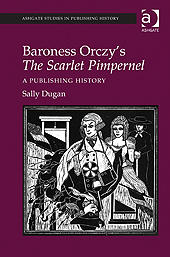 The sole surviving manuscript page of The Scarlet Pimpernel has a few last-minute changes in Orczy’s handwriting that heighten the discourse of romance; an indecision about whether to describe her heroine’s hair as ‘ardent’ or ‘golden’, and the addition of the colour of her eyes [...]. Orczy’s choice of this page as a sample for Story-Teller magazine suggests a willingness to be perceived as a romance writer. She herself wrote that her focus was on ‘pictures, love-scenes, adventures both comic and tragic, thrilling moments, dramatic scenes, and above all character – always character’. Although Orczy’s comments about her own work have to be treated with caution, this contains an important clue to the Scarlet Pimpernel’s longevity. Behind the wigs and Mechlin lace cuffs lies an enduring human story of love, misunderstandings, conflict of loyalties, audacious bravery – and a dramatic double life. (7-8)

This reminded me of Lauren Willig's description of the attempts to classify her Pink Carnation series:


When I wrote [...] the book that became The Secret History of the Pink Carnation, I was pretty sure that I was writing a romance novel. [...] On my first phone call with my brand new agent, I burbled about the book being in the tradition of Julia Quinn and Amanda Quick, and could we please, pretty please, shop the manuscript to Avon?  Visions of mass market paperbacks danced in my head.

“I’m not entirely sure you’ve written what you’ve think you’ve written,” came the voice of my new agent across the line.  “Let me try something else first….”

“Sure!  Absolutely!” I said [...] one month later my agent called me back to tell me that a prestigious hardcover house was making an offer—but not as a romance.  “You’ve invented a new genre!” he said.  “Historical chick lit!” [...]

Plans proceeded apace for the publication of the book [...]. It was going to be published in hardcover, as Fiction & Literature, with a chick lit cover featuring a modern woman in a Burberry jacket with a very cute bag.  I had nightmares about readers opening it, finding themselves in the Regency, and demanding their money back. [...] 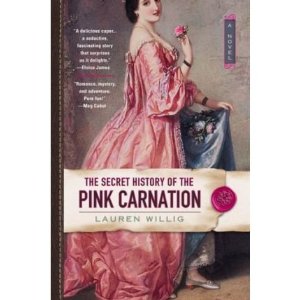 Then, overnight, chick lit died.  RIP.  Within two days, my publisher had come up with a new, historical cover (and I breathed a very deep sigh of relief).  Just about to go on my first ever book publicity junket, I was warned, “Whatever you do, don’t call it chick lit!  It’s historical fiction.  Got that?  Historical fiction.”

I’d gone through three different genres without re-writing a word.

Meanwhile, the book hit the shelves, followed by sequels, and the genre confusion continued.  I was adopted by the mystery community, who informed me that what I was really writing were historical mysteries, and why wasn’t I being shelved in mystery, where I belonged?  Friendly Borders reps told me that my covers were all wrong and I needed something that correctly represented the spirit of the books.  What would that be? I asked.  They didn’t know either.  In the absence of consensus, the books went into that great catch-all category on the shelves: Fiction & Literature.

I just went on playing genre stew, writing what I was writing, going to everyone’s conferences, and hoping that someone would eventually figure out where on earth to shelve me. 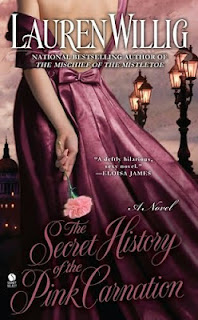 This went on until 2009, when the market tanked, e-books took off, and suddenly romance was outselling other genres.  After years of being told, “Stop calling your books romance!”, the world had come full circle.  I got another one of those phone calls: the first Pink book was going to be reprinted in mass market—huzzah!—with a romance cover.  And, by the way, did I realize I’d been writing romance? [...]

As to what my books really are… I have no idea.  I’ll leave it to you to decide.

It perhaps goes without saying (but I'll say it anyway), that there is a direct relationship between Willig's novels and Orczy's. Willig has written that


The idea for the story [in her series] emerged from endless years of overexposure to the Scarlet Pimpernel and his brethren (by whom I mean any dashing rogue, usually played by Errol Flynn, who delivers a witty line, jumps off a table, brandishes a sword, and defeats the perspiring villain with one hand held languidly behind his back).

Amusingly, in addition to having 11 sequels, The Scarlet Pimpernel (1905) had a precursor, published in 1898 in Pearson's Magazine, which was titled "The Red Carnation":


The Scarlet Pimpernel's first incarnation — in a short story called 'The Red Carnation' (1898) — was as plain Eugen Borgensky, a nihilist Pole at the head of a secret band of men identified by the red carnations they wore in their buttonholes. They plot to assassinate the Russian Tsar, but the plot is foiled when Borgensky's wife puts herself between the Tsar and his would–be assassins. (Dugan "Anarchy")

The contents page and an excerpt from the introduction to Sally Dugan's book are available from here. Sally Dugan's "Anarchy and Magic: Film Versions of The Scarlet Pimpernel Myth" appeared in issue 5 (2010) of Peer English and can be downloaded here. Willig's account of the classification of her series has recently been re-published at the Popular Romance Project.
Posted by Laura Vivanco at Thursday, February 28, 2013