German Romances in the US 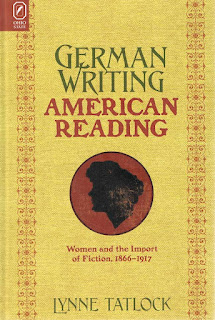 Lynne Tatlock's German Writing, American Reading: Women and the Import of Fiction, 1866-1917 was published by the Ohio State University Press in August and although the title doesn't specifically mention romances (and in any case "romance" had a much broader meaning then than it tends to do in the US today), I suspect that chapter 4, "The German Art of the Happy Ending: Embellishing and Expanding the Boundaries of Home" may be of interest to romance scholars. The body of works under analysis comprises


nearly 100 original texts, approximately 180 American translations, more than 1,000 editions and reprint editions, and hundreds of thousands of books strong—comprised popular fiction written by German women and translated by American women. [...] Lynne Tatlock examines the genesis and circulation in America of this hybrid product over four decades and beyond. These entertaining novels came to the consumer altered by processes of creative adaptation and acculturation that occurred in the United States as a result of translation, marketing, publication, and widespread reading over forty years. These processes in turn de-centered and disrupted the national while still transferring certain elements of German national culture. Most of all, this mass translation of German fiction by American women trafficked in happy endings that promised American readers that their fondest wishes for adventure, drama, and bliss within domesticity and their hope for the real power of love, virtue, and sentiment could be pleasurably realized in an imagined and quaintly old-fashioned Germany—even if only in the time it took to read a novel. (emphasis added)

Here's a bit more about Chapter 4:


Chapter 4 examines German novels as American reading from the perspective of the happy ending, an international signature of romance novels and of nearly all of the German novels by women in my dataset. The chapter uncovers and analyzes variations in plotting ritual death and recovery to a state of freedom that characterize these German novels and that appealed to American readers by offering them the vicarious experience of a multiplicity of female subjectivities and female-determined male subjectivities while cautiously expanding the boundaries of home in a place called Germany. I combine analysis of texts with examination of exemplars of books and the history of the book publication of each translated text.

Email ThisBlogThis!Share to TwitterShare to FacebookShare to Pinterest
Labels: Germany, Lynne Tatlock, romance in translation, US