Molly Make-Believe: "Unreal but Not Untrue"?

Laura Vivanco
Over the holidays I'm going to be taking a break from blogging so I thought I'd leave you with a suitably wintry story and some reflections on fiction.

Jennifer Crusie wrote in one of her essays that

Folklorist Max Luthi says that fairy tales are “unreal but not untrue” because they deal with the greatest themes in literature and life, and much of genre fiction, grounded in myth, legend, and tale, retells those primal stories for adults.

In Crusie's The Cinderella Deal (1996) the hero, Lincoln Blaise, "need[s] a professional liar" (17) to help him, and he turns to Daisy Flattery, a storyteller whose card reads 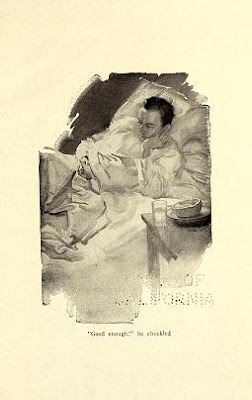 Eleanor Hallowell Abbott's Molly Make-Believe (1910) is a love story which is also about fiction and truth.1 Carl Stanton is bedridden due to a serious attack of rheumatism and his fiancée, Cordelia, has gone on holiday for six weeks. She writes to promise him that she'll send him a letter roughly once a week and suggests that he "investigate" a "ridiculous circular" because it "seems to be rather your kind" (6). The circular advertises the services of

Comfort and entertainment Furnished for Invalids, Travelers, and all Lonely People.

Imaginary Persons.
Reliable as your Daily Paper. Fanciful as your Favorite
Story Magazine. Personal as a Message from your Best Friend. Offering all the Satisfaction of receiving Letters with no Possible Obligation or even Opportunity of Answering Them. (11)

I don't want to spoil the story for those who haven't read it, so I won't say much more about it, but here's one last quote, in which Stanton describes the letters he's received from the Company:

"[...] they're not lies!" snapped Stanton. "Surely you don't call anything a lie unless not only the fact is false, but the fancy, also, is maliciously distorted! (99)

Again, I'm going to be cautious about how I phrase this, so as to avoid spoilers, but since Stanton doesn't know the real identity of Molly Make-Believe he starts to speculate about what she might be like. Let's just say some of aspects of this speculation are "interesting" to a modern sensibility. But given that the novel has metafictional elements, and given the discussions of "slash" fiction we've had here, it makes me wonder what revisionist versions might be possible, in which Molly's identity turned out to be different.

One advantage of reading an original version is that you get to see some of the advertising that would have been seen by the original readers of the book. At the end of this novel we can find an advertisement for romances by Margaret Pedler (some details about her can be found at Wikipedia) and Ethel M. Dell (and some details about her can also be found at Wikipedia). She was born in 1881 and died in 1939. Her

success rests with The Way of an Eagle (1912), which was refused by eight publishers before re-typing and final acceptance by T. Fisher Unwin. By 1915 the book accounted for half Unwin’s turnover! By the end of the First World War, Dell was earning a huge income from her books – one of the wealthiest authors in Britain. Her easy style and clear eroticism made her an illicit favourite with middle-class adolescents and working-class servants and gained her the title of ‘the housemaid’s choice’ for her success in writing what Rebecca West called ‘tosh’. […]

During the 1930s Dell was still one of the most popular women’s authors to be asked for at the ‘tuppenny’ libraries (alongside Elinor Glyn and Marie Corelli). Although ‘spiritual’ and conservative, Dell’s stories also contained the violent passions so enjoyed by women (especially young girls) before World War Two. Her influence on women’s romance is still evident and can be seen clearly in the ‘sexier’ women’s writers of a later age, but also in works like E. M. Hull’s The Sheik (1919). She was also an early influence on Barbara Cartland and Catherine Cookson; she is one of the great progenitors of Mills and Boon. (Bloom 134-35).

1 Molly Make-Believe was number 9 in the 1910 best-selling fiction rankings from Bowker's Annual/Publisher's Weekly.

The image is of Carl Stanton, in his sickbed, chuckling after he's read the advertisement from The Serial-Letter Company.
Posted by Laura Vivanco at Monday, December 20, 2010