Laura Vivanco
According to Sarah Wendell and Candy Tan,

everyone has a very firm idea of what the average romance reader is like. We bet you already know her. She's rather dim and kind of tubby - undereducated and undersexed - and she displays a distressing affinity for mom jeans and sweaters covered in puffy paint and appliquéd kittens. (4)

If you'd like to see a picture of this typical romance reader, created by Joanne Renaud for the Smart Bitches' book, you can click across here. Wendell and Tan didn't mention the cause of the tubbyness, but it may be due to those bonbons that we romance readers apparently can't resist:

We still persist in the stereotypical belief that women who read romances can't get a date on Friday night. Instead, they lounge around all day eating bon-bons while they read their little books. This is simply untrue. (Bouricius 32)

According to Rachel Anderson, the genre "is usually condescendingly dismissed by those with highbrow pretensions as being harmless wish-fulfilment for ageing spinsters, or relatively harmless escapism for the ill-educated masses" (12-13). I suspect the stereotype varies a bit, perhaps from one country or time-period to another: Anderson was writing in the UK in the 1970s, whereas Wendell, Tan, and Bouricius were published in the US in the 2000s.

I'm not sure where these stereotypes of the romance reader come from, or how they're perpetuated, but since I'm interested in societal perceptions of romances and romance readers I was intrigued by Kirsten Valentine Cadieux's post about the recently released RED. She

was delighted to discover that a central narrative device of the film's setup is a somewhat elaborate, if simple, pattern in which the male romantic lead inquires about the current habits of the female romantic lead [...]; he then proceeds to read along with her trashy romance novels. 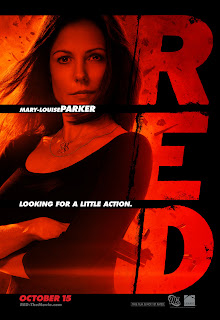 In the movie Mary-Louise Parker plays the part of Sarah, "a sweet, mild-mannered government HR rep and lover of romance novels who is inadvertently drawn into the film's dangerous world of intrigue" (CBR):

"She's a small town, Midwestern girl, and I think she's really positive and there's not a whole lot of dark in there," Parker said of Sarah during the press junket for "RED" in New York City. "She's a really bright, positive person, she reads romance novels and she kind of imagines herself "in" one of them. So when all of this happens, I think to her it's a dream come true. Even the horrible parts of it, like getting her mouth duct taped, there's some element to that that's thrilling and wonderful." (CBR)

Unfortunately, since I try to avoid depictions of violence, I won't be able to see for myself how the two romance readers (Sarah and Frank) challenge and/or reinforce particular stereotypes about romance readers.

When I looked to see if there were other movies with characters who read romance, I came across the following description, written by Dyanne, at The Romance Reader:

AMERICAN DREAMER - Stars JoBeth Williams and Tom Conti. Very funny - I love this movie! JoBeth Williams' character is a housewife who loves to read romantic thrillers by Rebecca Ryan and so she enters a Rebecca Ryan writing contest. She wins a trip to Paris and on her way to the awards luncheon gets knocked on the head -- when she awakens, she believes she is Rebecca Ryan.

I haven't seen that one either.

So is there anyone here who has seen either of these movies? If so, what did you think of their depiction of romance readers? And do any of you know of any other movies with romance-reading characters? Finally, is Jayashree Kamble overstating the case when she writes that

stereotypes about romance fiction are so deeply inscribed in popular discourse that they are regularly referenced by the entertainment media, such as television shows and movies, for comic effect. In every case, romance novels are portrayed as titillating fantasies written and read by oversexed or undersexed women. Romance readers often also come across in these electronic media as possessing little intelligence and discernment and as being incapable of separating themselves from the text. In most cases, these media are popular texts themselves and ridicule the romance genre as a way to elevate their own status by contrast and detract from their own formulae. (27-28)