Dr. Raymond B. Browne, who was instrumental in establishing the first full-fledged department of popular culture in the United States at Bowling Green State University in 1973, died Oct. 22 at home in Bowling Green, Ohio. He was 87.

Internationally recognized as a publisher and expert in popular culture, Browne is often credited with coining the term and as being among the first to propose its serious study.

The Browne Popular Culture Library, which bears his name, includes among its many collections

a wide range of romance materials from novels to valentines. The collection includes more than 10,000 volumes of category romance series from publishers such as Harlequin, Silhouette, Loveswept, Candlelight, Ecstasy, and others. The holdings also include a sizable collection of mass market novels, including Georgian, regency, gothic, contemporary, and historicals.

Additional "romantic" items can be found in the Library's various special collections, including large holdings of ephemeral items, such as movie advertisements, posters, and press kits. A unique collection of romance publishing-house book marks and a large selection of valentines from various eras may also be found in the Browne Popular Culture Library.

The library also holds the "RWA’s organizational archives documenting its founding [...] and following its growth into the world’s largest non-profit genre organization."

He received his PhD in American literature, folklore and history from UCLA in 1956. He accepted a position in the English department at the University of Maryland. While at Maryland his interest in American Studies expanded after meeting Carl Bode, one of the founders of the American Studies Association. Bode was part of a growing number of scholars who believed that academia needed inter and multi-disciplinary approaches to the study of the humanities and of literature. Browne embraced this view.

After not receiving tenure at the University of Maryland, he assumed a post in the English department at Purdue in 1960. Between 1965 and 1966 he was instrumental in arranging two Purdue conferences intended to broaden the traditionally narrow approach to studying culture. Browne would remain at Purdue until Bowling Green State University offered him a folklore professorship in 1967. In 1968 research facilities began to emerge as the Center for the Study of Popular Culture and the Popular Culture Library. In 1970 the Popular Press was established. Gradually he introduced a popular culture curriculum into his folklore classes, creating much unpopularity within the English department. This in turn would lead to the establishment in 1971-1972 of a separate Department of Popular Culture at BGSU chaired by Ray Browne. After being away for a year at the University of Maryland, he returned to BGSU in 1976 and remained until his retirement in 1992.

An obituary at CBC News recounts that

"Culture is everything from the food we've always eaten to the clothes we've always worn," he said in a 2003 interview with The Associated Press.

While many in the field credit Browne with coming up the name "popular culture," no one could say for sure whether he originated it. He said he made a mistake in 1967 when he first used the phrase.

"If I had called it everyday culture or democratic culture, it would not have been so sharply criticized," he said.

Initially, as mentioned in another obituary, this time in the Telegraph, 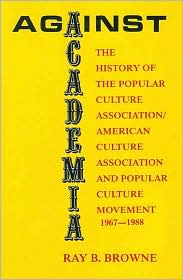 Professors at universities nationwide thought Browne, an English professor, was trying to demean or trivialise what they were teaching when he founded the popular culture department.

But he insisted that interest was genuinely rooted in finding out how society affects culture, and how culture affects society. The concept of popular culture as an object of study has been embraced worldwide, and it is commonly taught as part of a range of university courses.

He was interviewed in 2002 by Americana: The Journal of American Popular Culture and

provided us with our most thorough and lasting definition of popular culture:

Popular culture is the way of life in which and by which most people in any society live. [...] It is the everyday world around us: the mass media, entertainments, and diversions. It is our heroes, icons, rituals, everyday actions, psychology, and religion — our total life picture. It is the way of living we inherit, practice and modify as we please, and how we do it. It is the dreams we dream while asleep.