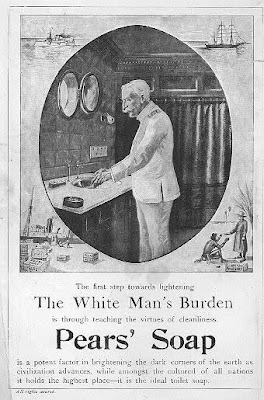 As you can see if you look closely at the advertisement for Pears Soap (on the left), the text reads

The first step towards lightening The White Man's Burden is through teaching the virtues of cleanliness. Pear's Soap is a potent factor in brightening the dark corners of the earth as civilization advances, while amongst the cultured of all nations it holds the highest place - it is the ideal toilet soap.

Admiral Dewey, victor at Manila Bay, washing his hands on shipboard. Smaller images in the corners show: an American naval warship (upper left); a wooden Spanish ship (upper right); a missionary instructing an almost naked dark-skinned Filipino in the need to use Pears' (lower right); and a shipload of Pears' being off-loaded in Manila harbor. (McClymer)

So, what does an advertisement, which according to Wikimedia Commons dates from the 1890s (Kimberly Jensen specifies that it is from McClure's Magazine 13 (Oct., 1899)) have to do with the romance genre?

Well, I hope that will become very clear (not dark, opaque, or dirty) in what follows. This morning I came across a post by Tumperkin, in which she explained that

Over the years I've read posts about all sorts of difficult issues: forced sex, BDSM, controlling heroes Stuff that raises issues over consent, abuse, self-worth. And for me, I'm cool with all of it. No matter how much something might offend 'normal' mores, if the author can make it explicable with reference to their characters, I can be cool with it. I'm disturbed by reader comments that say authors 'shouldn't' write this or that character or scene or event in a particular way. I'm hugely protective of freedom of expression and I resent the attitude (whether partriarchal or matriarchal) that readers don' t have the wit to make their own judgements.

And so, until recently, I've been patting myself on the back thinking that I'm this uber-liberal, all cool with the morally ambiguous and questionable. The trouble is, I've recently had to admit that I do have a sensitivity. [...] And it's around killing/ punishment/ guns/ stuff like that.

Tumperkin's comment broadens the discussion we've been having over the past week which can perhaps be summarised as: "you already have politics in your escapist reading, you just don't notice it's there when it's got the slant you prefer." I don't want to dwell on the particular issue she brings up (although we did touch very, very briefly on gun control in response to my last post), but I would like to add a few more links and examples.

Smart Bitch Candy linked to a series of posts by Evil Auntie Peril (1, 2, 3, 4). EAP takes a closer look at dirt (and sometimes the lack of it) in the romance genre and one of the conclusions she reaches is that "Cleanliness = morality. H/H are good people. Disease, dirt and bad breath only happens to deserving villains or ex-partners (possibly tragically if its backstory, possibly because they are villains)." It's worth reading all four parts of the post in full.

Candy continues by looking at some other examples of how certain aspects of personal appearance and preferences are used in the genre as "short-hand for villainy and otherness." One example she gives involves food:

this detail was quite clearly used in a way to Show How Furrin the Chinese Are. It was a way to set up Chinatown and the Chinese as Other, as Exotic, as Not Who We Are, We Who Consume Mostly Muscle Meat and Turn Green When There’re Pink Bits In Our Roast Chicken. The details regarding the Chinese food and the roast ducks in the display window weren’t used to villainize the Chinese characters, in the way personal hygiene is used to villainize other people in historicals, but the hero and heroine’s squick reaction solicited a similar squick reaction in the reader, and hence empathize more with the characters.

how authors use body weight, especially in male characters, as a way of indicating Super Duper Concentrated Villainy (Evil Nature Established in only 1/3 the Wordcount!) [...] I’m thinking back to other obese male villains I’ve encountered, and the ones that aren’t emasculated or desexualized tend to be portrayed as sexually perverse: they’re into extreme sadism, or pedophilia, or, I don’t know, clown-rape and gerbils, with an undertone that regular sex just isn’t good enough for them. Corpulent villainy is rarely garden-variety villainy. It’s Villainy Plus. The size of their bodies seems to represent the perversity of their souls, and this is a tried and true method in fiction in general: have the ugliness inside manifest itself outside.

These short-hands and other political messages are often difficult to spot, particularly if the person being cast as the "Other" is different from the reader. Because of this, it may be easiest to notice their presence in older romances. E. M. Hull's The Sheik is a text which includes disdain for foreign food/drink and a fat, dirty, smelly villain who is racially Other.

Lady Diana Mayo distinguishes between normal coffee and "native" coffee: "the smell of native coffee was heavy in the air" (105) and "Diana hated the sweet, thick stuff" (106). As for the fat, dirty, racially-Other villain himself, Ibraheim Omair has a "bloated, vicious face and gross, unwieldy body" (103) and in his tent

there was a close, pungent smell that was eminently native that she [Lady Diana Mayo] never experienced in the cool airiness and scrupulous cleanliness of Ahmed Ben Hassan's [the Sheik's] tents. Her sensitive lip curled with disgust, all her innate fastidiousness in revolt. (106)

The villain's race and his dirt are literally inextricable in the following description, and his physical size is, as Candy wrote, an indication of the extent of his evil:

This was, indeed, the Arab of her imaginings, this gross, unwieldy figure lying among the tawdry cushions, his swollen, ferocious face seamed and lined with every mark of vice, his full, sensual lips parted and showing broken, blackened teeth, his deep-set, bloodshot eyes with a look in them that it took all her resolution to sustain, a look of such bestial evilness that the horror of it bathed her in perspiration. His appearance was slovenly, his robes, originally rich, were stained and tumbled, the fat hands lying spread out on his knees were engrained with dirt, showing even against his dark skin. (108)

He reeked of sweat and grease and ill-kept horses, the pungent stench of the native. Her thoughts went back to the other Arab [the Sheik], of whose habits she had been forced into such an intimate knowledge. Remembering all that she had heard of the desert people she had been surprised at the fastidious care he took of himself, the frequent bathing, the spotless cleanliness of his robes, the fresh wholesomeness that clung about him, the faint, clean smell of shaving-soap mingling with the perfume of the Turkish tobacco that was always associated with him.

This cleanliness is perhaps intended to be read as an early clue that the Sheik is not a "native": he "is English" (120).
---