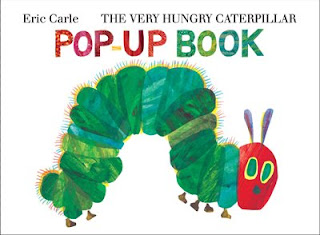 I've been re-reading Loretta Chase's Lord of Scoundrels and for some reason the following passage suddenly reminded me of something:

By Friday, he had debauched her in the window seat of his bedroom, an alcove off the portrait gallery, under the pianoforte in the music room, and against the door of her sitting room - in front of his mother's portrait, no less. And that was only the daytime depravity. (270)

It didn't take me long to work it out. At this point I should warn anyone who hasn't read Eric Carle's The Very Hungry Caterpillar that there will be spoilers. As explained in Wikipedia

The Very Hungry Caterpillar is a children's book written by Eric Carle, first published by the World Publishing Company in 1969. The winner of many awards, it has sold 30 million copies. [...]

Do I need to mention that on first seeing Jessica, Dain "contemplated licking her from the top of her alabaster brow to the tips of her dainty toes" (27-28) or that after their marriage "The reality, he found, was sweeter, and the taste and scent of her more intoxicating by far, than the dream. [...] He inhaled her and tasted her" (261)? Dain's "hungry caterpillar" stays hungry, of course. Lord of Scoundrels isn't a children's book, after all. But emotionally one could say that he "pupates and emerges as a butterfly" just like romance rakes tend to do.