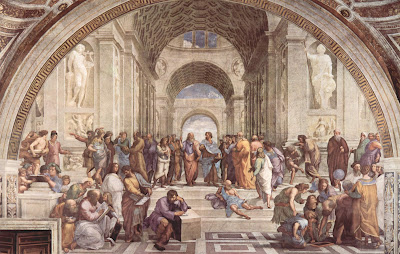 The problem of plagiarism's being discussed again in romance-land (because of something cross-posted at Dear Author and the Smart Bitches). I don't want to get into a discussion of the details of what constitutes plagiarism (anyone who's interested in our views on that can take a look at the posts Sarah and I wrote last year, and there's discussion of it on both the DA and SB threads). No, what I want is some help in deciding what to do when one discovers an instance of what one thinks might be plagiarism.

In a romance I was working on (written in 1979, not by any author with an online presence and no-one at all famous, just in case anyone is worried) I noticed a couple of sentences which contain significant fragments of text that are identical, or near identical, to parts of sentences in the current edition of the online Encyclopedia Britannica, at least the parts of it I could read. The trouble is that access to the content of the EB is restricted, which is why matching phrases come up via Google but I couldn't guarantee I'd be able to provide entirely accurate transcriptions of the relevant sections of the EB passages in question. I haven't had time yet to find an edition of the EB which would have been available in the 1970s, but I've no reason to suspect that the EB copied details from a romance novel, nor could the similarities be accidental, so I'm working on the assumption that that part of the EB hasn't changed much in later editions. I'll double check all that before I take any action, which is why I'm not including the name of the author here, or quoting the passages in question. I don't want to fall into the ethical problem of wrongly accusing someone of plagiarism, after all.

No, my ethical problem is about what I should do if, as I expect it will, the text in the older, paper copy of the EB matches that of the modern, online EB. I'll give a bit of an overview of the problem, to give a bit of context and describe the possible extent/severity of it.

Some sentence fragments in the novel which matched those in the EB were describing technical aspects of a building that the heroine is visiting (and is the building described in the EB), but other, non-technical parts could certainly have been changed and put into the author's own words and she didn't do that. I noticed the problem a while ago, and I was troubled by it, but as Nora Roberts wrote on the thread at Dear Author, "I’d need more than one sentence to get my dander up." Then the question of plagiarism was raised again at Dear Author and the Smart Bitches. As a result of the discussions there, I went back to the novel to take a closer look and last night I came across another couple of sentences with the same problem, just a few pages after the ones I'd already found. That's when I really felt I couldn't let it slide.

Enough little changes had been made to make me suspect that the author deliberately reworked the sentences in order to avoid full sentences of word-for-word copying. I suppose it's conceivable that she copied the sentences verbatim from the EB (though she'd have had to just copied out those specific sentences and none of the rest of the article for that to be credible), left them for a while in a pile of papers without annotating the source, then came across them and thought she'd already changed them enough to make them hers, and at that point reworked them slightly. Possible, but not very likely.

Maybe she thought she'd changed them enough for it not to be plagiarism. As we all know, though, using someone else's words while sticking in or taking out a few commas, changing the word order slightly and/or inserting a couple of your own words in between chunks of someone else's, is still plagiarism. I wonder if the whole thing might have been the result of the mistaken "it's OK if you copy from non-fiction in order to get the details accurate" mindset. Clearly, that's wrong. It's still plagiarism, and authors of non-fiction (as I know from personal experience, since that's what I write) can spend a lot of time trying to polish their prose.

I don't want to boycott the author completely because (a) the book has a very nice example of legitimate intertextuality (b) I'd spent a considerable amount of time working on that before I noticed the illegitimate kind (i.e. plagiarism) and I'd rather not have wasted all that time, (c) I haven't come across another example of the legitimate intertextuality quite like this one, so it wouldn't be easy to find another example and use that instead and (d) the sentences containing plagiarised fragments make up a very, very small proportion of the whole novel.

However, if the fragments of text match those in the EB, what the author did was wrong, and I don't want to let plagiarism pass uncriticised, so although I want to keep in what I've written about the interesting and good bit of the novel, I feel I should acknowledge the big problem in that other section, even though it's not directly relevant to the issue I wanted to write about. I'm currently favouring a compromise solution, which is to footnote the problem. Or would it just be sufficient for me to name and shame the author by posting the passages here, on the blog? Should I boycott her work completely? If I do, should I also boycott all romances which are problematic in other ways (e.g. racist novels or novels written by authors who've done something highly unethical)? Does exposing the problem in this way raise awareness of plagiarism, whereas boycotting an old text and refusing to write about it at all would be a meaningless gesture given that the book has pretty much already been forgotten by most people? Does raising the issue by giving specific instance of it in the romance genre make the genre as a whole look bad? I don't think so, since all kinds of genres, including literary fiction, have had plagiarism scandals.

What do you think?

The painting is of a fresco by Raphael in the Vatican, and is titled "The School of Athens." Many of the figures depict famous philosophers. I found the photo at Wikimedia Commons.
Posted by Laura Vivanco at Thursday, January 15, 2009

Email ThisBlogThis!Share to TwitterShare to FacebookShare to Pinterest
Labels: plagiarism