Not Another Ripped Bodice! 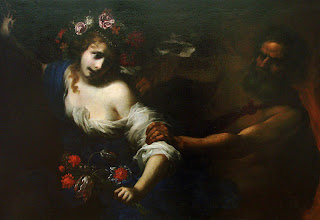 Mark Athitakis gives a concise description of the term "bodice-ripper" which explains why it's so hated by so many romance authors and readers:

Bodice-ripper -- Derogatory term for the historical single-title romance, referring literally to the habit of '70s historical novels of including sex scenes in which the heroine's clothes are torn off, or something similarly abusive. A dead subgenre; when uttered to a romance aficionado, the inspiration for a lengthy, irate lecture.

Poison Ivy offers us a description of just how irate that response can be:

The other evening I was dining with a batch of old friends from the comic book business. As conversations do, the talk turned to what each of us was working on, and thus to my long stint in romances. An otherwise nice fellow made the mistake of asking me about “bodice rippers.” I almost leapt across the table to throttle him. He was taken aback by my impassioned annoyance.

However, as I was reading Emma Holly's Courting Midnight, I got the distinct impression that this particular romance author was deliberately and playfully transforming the bodice-ripping motif. She includes this scene between two secondary characters:

"You are mine," he said, squeezing it [her breast] possessively. "No other man shall have you."
Caroline had been dreaming of hearing those words all her life. She wanted to match them with an equal claim of her own, some gesture for the bold step she was taking. One glance at his heaving chest told her what it should be. She took hold of his shirt's open neck and tore the sweaty linen straight down the front. [...]
"No other woman," she declared on a gasp of sweet sensation, "shall ever have you."
Aidan had been goggling over her behavior, but at this he broke into a laugh. "I am sure I dare not disagree[."] (286)

It made me "goggle" and "break into a laugh" too, because the reversal in the gender of the person ripping the bodice transforms the motif, rendering it slightly ridiculous by unsettling gender stereotypes. Here we have the virgin ripping the clothing off her hunky lover, taking control of her own sexuality, claiming her man and making it more than clear that she doesn't need to be forced or seduced in order to feel able to express her desires. In the process, the motif loses its undertones of danger and rape, leaving space for laughter.

For me, genre form is like the melody of an old standard; I like to riff on it, work against it, improvise. So I wrote a ripped bodice into my first romance novel. It's a tiny little rip, to fool someone. I thought it was funny. I enjoyed having my hero apologize to my heroine that he'd wanted evidence of carnality that was "absolutely convincing." As though everybody, even in pre-Revolutionary France, would know what a ripped bodice signified.

Bodice-ripping has also evoked some rather more prosaic responses. Over at the eHarlequin forums Shewolf0316 once commented that

As is often found in romance and erotica alike, there is the one scene where the characters are so incensed with lust that they can't wait and they guy rips the woman's blouse right down the middle.

If it were me in the middle of a sexy encounter like that and a guy tore my clothing from my body, destroying it, I'd be ticked off! I can actually visualize it in my mind, the guy tears my shirt apart, I stop smack in the middle of his seduction and rant "what the h*ll are you doing? I paid $50 bucks for that shirt and you just ruined it!"

It's a very valid point and in another scene in Holly's novel, the hero takes such financial considerations into account

A flurry of motion brushed her skin, like giant wings beating up and down. She gasped into his mouth when she realized what he had done. He was indeed in a rush. She was naked, and in no more time than it took to blink half a dozen times. Her clothes lay in a shredded heap around her ankles.
Still fastened to her at the mouth, he chuckled at her surprise. "I promise to replace them," he said. (263)

Not only does the hero promise to replace the damaged clothing, but the context in which the actions take place pre-empts a second prosaic concern about bodice-ripping. As noted by another commenter on the eHarlequin thread, Lady Amalthea,

I feel like fabric is tougher than the authors realize...wouldn't it be somewhat uncomfortable having someone pull on your clothes hard enough that they rip? I'm thinking particularly about elastic-waist panties...that elastic snapping back on you...ouch!

This isn't a problem for Lucius because he's a super-powerful upyr and as the novel's a historical as well as a paranormal romance, the heroine's not wearing any elastic.

I haven't read Erica Jong's Fear of Flying, but in it "Jong coined the term 'zipless fuck,' which soon entered the popular lexicon" (Wikipedia). The phrase came to mind when I read the scene in which Lucius shreds clothing in seconds. Here's how it's described in Jong's novel: "The zipless fuck was more than a fuck. It was a platonic ideal. Zipless because when you came together zippers fell away like rose petals, underwear blew off in one breath like dandelion fluff" (qtd. in Berger 140). Shana Abé's drákon protagonists manage this kind of thing with even greater ease than Lucius does. All they need to do is change into smoke and then back into human form: "She [...] Turned to smoke and back, so she could lay atop her gown and the blankets and feel his hands upon her bare skin" (332). It's probably worth noting that Jong also wrote that "For the true, ultimate zipless A-1 fuck, it was necessary that you never get to know the man very well" (qtd. in Berger 140). Romance authors would not seem to believe that's a necessary or desirable pre-condition to enjoyment of a "zipless fuck", but in general they do tend to end their novels before some of the more mundane details of life can intrude on their characters' passion.

Finally, since I'm discussing the topic of romance and bodices and have mentioned ways that it's been humorously transformed, I feel I must report RfP's latest theory:

Romance novels have a long tradition of lurid covers; the older novels in the genre often featured a bare-chested man ripping open the bodice of a stunned-looking woman. Or should I say, apparently ripping open. If the bodice ripper is really a bodice lacer, that puts a new complexion on the matter.

The painting is "The Rape of Proserpine (about 1650), by Simone Pignoni" (Wikimedia Commons).
Posted by Laura Vivanco at Monday, November 24, 2008